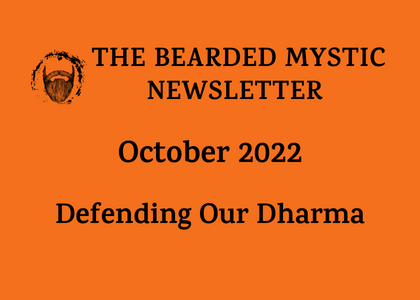 What happened in the UK

In the past few weeks, we have seen religious violence in the guise of protests, where a bunch of people identifying as Muslim decided to terrorize Hindu temples in the UK, specifically in Leicester and Birmingham, and also people who identified as Hindu. Social media played a horrible part in this, with misinformation spread on Muslim social media groups stoking Hinduphobia sentiments. Law enforcement seemed rather lax. The UK government…well, the less said about that, the better. Before I start, I am not a supporter of the BJP or RSS; in fact, far from it. I am not a fan of Modi Ji either. But as I identify as a Hindu, what do I think about these attacks? I condemn any form of violence or terrorizing. I don't see any value in this; it serves no purpose. Anyone claiming that violence and vandalism are appropriate is nothing but a danger to the very fabric of society.

I was lucky enough to be part of a few Twitter spaces hosted by a friend Vivek, and I was encouraged to see the unity of Hindus in dealing with this and then shocked at how people were willing to show their hatred. I often was left wondering what would our ancient Rishis be thinking.

First, I think it is best to get a reality check. Violence against Hindus isn't going to stop, and I fear it will only worsen. With this in mind, I do think that all temples need to think of security measures and receive help from law enforcement. We need to ensure our local politicians know about our presence and to ensure that we maintain positive relationships with them.

Do we lower our standards?

Some suggestions were that Hindus should be proud to shout 'Jai Sri Ram and that we should lower our standards. The standards in question are our mentality of accepting and respecting all religions, tolerating even the hatred that comes our way, and even remaining non-violent in times of crisis. Firstly, we must self-defend if someone attacks us due to our religion. Our Bhagavad Gita suggests that this is fine. Now, shouting slogans without purpose means nothing nor brings respect or attention to the injustices. Our standards are high; hence, we are one of the oldest religions in the world. Our humane and humble approach toward spirituality is what is endearing about Hinduism; it is what draws non-Hindus to learn about our spiritual heritage. I will not ponder much further other than we don't need to say slogans like 'Jai Sri Ram' rather we need tk\o do something more practical - condemn the actual violence itself. Raise slogans about putting an end to violence, discrimination, and hatred. This approach is much more powerful. When we think universally, the universe will support us!

My advice as we advance is for the long term and must be analyzed that way. Hindus need to stop being 'cultural' Hindus. So what do we need to do:

This way our standards will remain high, and we will fight Hinduphobia with the highest dignity. We have had empires collapse because of our unity and need to stay together. We have made much progress, but much more needs to be done. I hope you will join me in either teaching about Sanatana Dharma or, at the very least, learning and supporting it.

Wisdom Of The Mystics Episodes

Conversations With The Bearded Mystic Episodes